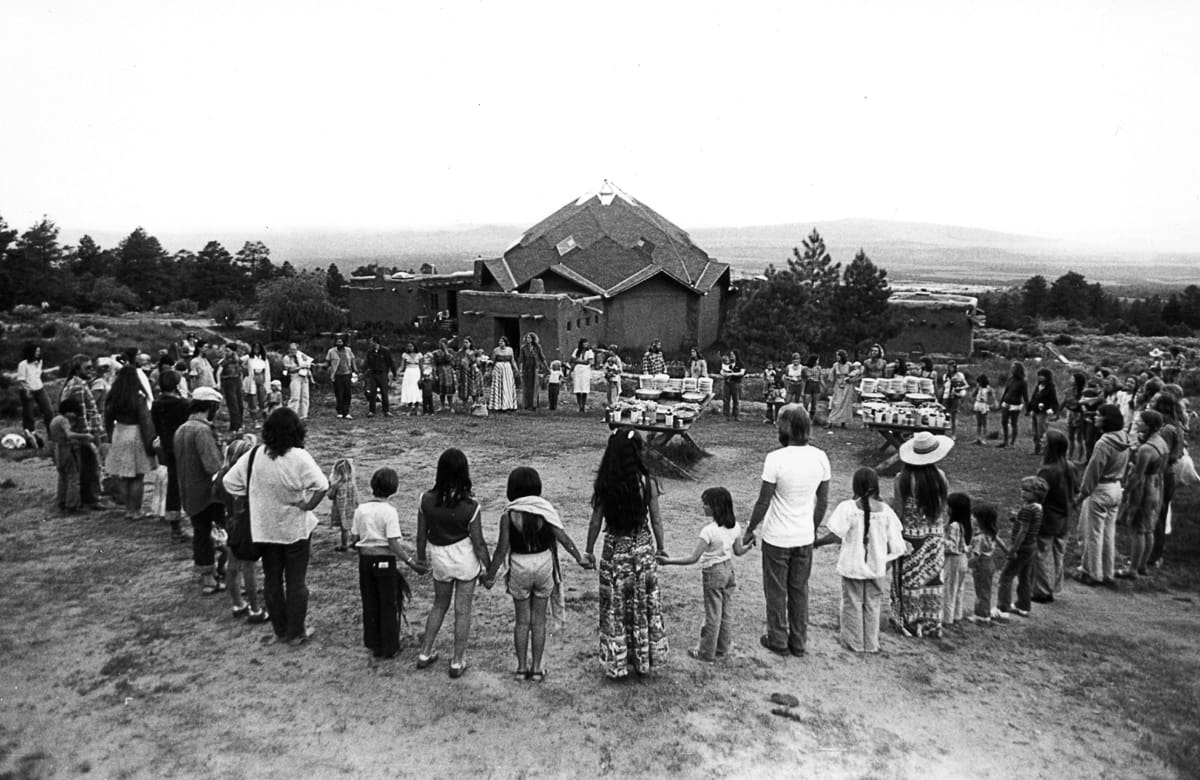 Origin of the term “Lama”

The name “Lama” comes from “la lama”, which means “mud” in Portuguese. Portuguese, not Spanish, interestingly, because the predominant culture and language of the early European immigrants who made their home in the Taos vicinity in the 1550’s were Spanish. How precisely the Portuguese term came to be used in this small settlement 20 miles north of Taos is uncertain, but the community that developed, and continues to this day, is aptly named. During the winter and spring, the roads and paths are perpetually muddy from the freeze/thaw of the snow and the spring rains. Nearly everyone on the Mountain has an anterior “mudroom”, where shoes are taken off in order to keep the rest of the house from becoming one large dirt floor.

Many mistakenly assume the name “Lama” refers solely to Lama Foundation and implies a singularly Buddhist focus. In fact, Lama Foundation was named for the Spanish community that was already here when the Foundation was founded. The land itself was historically an important crossroads for the Pueblo Indians that travelled through the area, and the spring on the land was considered a holy place, where warfare was not allowed. One of the original homesteads in the area, the approximately 110-acre property was privately owned before the Forest Service bought up the surrounding mountains and protected it as the Carson National Forest. Famously, the co-founders of Lama Foundation named it for the Lama area and the concrete foundation that existed on the property when they purchased it.

History of the foundation

Lama Foundation was founded in 1967 by Steve (now Nooruddeen) and Barbara Durkee (now Asha Greer) and Jonathan Altman, whose work with the psychedelic art community USCO in New York led to the intention and eventual creation of the community in Lama, New Mexico. Designed by Steve, the Dome complex was the first building constructed at Lama Foundation, and Little Joe Gomez of the Taos Pueblo, an early mentor to the fledgling community, directed its construction. Another early mentor, Hermann Rednick directed the formation of the invisible structure. On his counsel, Steve, Barbara, and Jonathan agreed to three fundamental rules that have shaped Lama since it’s beginning: 1) No drugs 2) Daily Meditation 3) Marital Fidelity. In 1968, the community was incorporated as a non-profit “educational and scientific” organization.

In 1970, Steve and Barbara’s friend Richard Alpert, now Ram Dass, returned from his first pilgrimage in India where he met his guru Neem Karoli Baba. With the aid of the artists in residence at Lama Foundation, Be Here Now was originally printed and sold by the members of the community in 1971, and eventually reformatted and printed for mass publication by Random House. 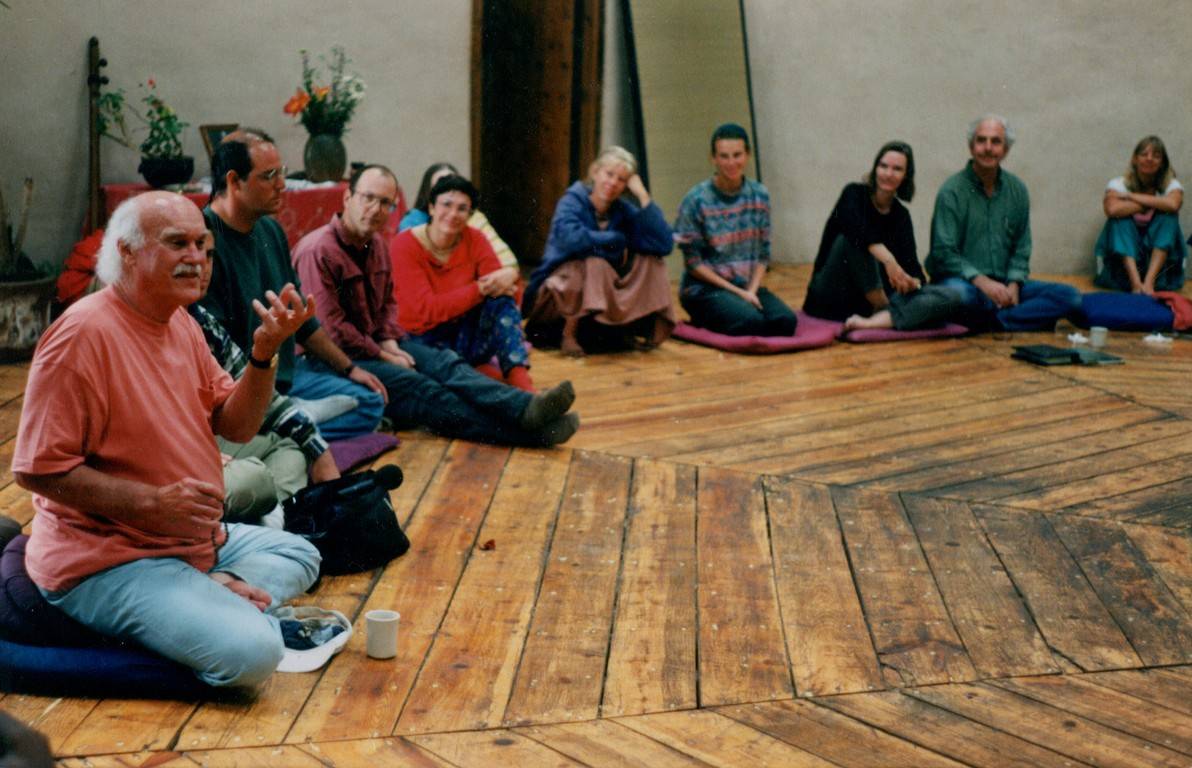 The success of Be Here Now led to a flourish of activity, and Lama Foundation quickly became a landmark for spiritual renewal and discovery. One of the first centers in the United States to host Eastern teachers, the inter-religious dialogue at Lama helped to spark a national movement. During this time, Lama hosted many eminent spiritual leaders, notably Murshid Samuel Lewis of the Chisti order of Sufis who is now buried at Lama Foundation, Stephen Levine, Jack Kornfield, Chogyam Trungpa Rinpoche, Father Thomas Keating, Robert Bly, Baba Hari Dass, Natalie Goldberg, Bhante Gunaratana, Rabbi Zalman Schachter, and Joshu Sasaki Roshi.

Originally, the intent for Lama was to be a place of residence for the founders, and the programs and retreats held here were generally for them and a select group of people on a similar path. With the booming success of the 70’s, however, Lama quickly turned into a large retreat center, hosting gatherings upwards of 100 people, highlighted by the yearly Ram Dass retreat, which drew enormous crowds.

The success and evolution at Lama continued through the 80’s and 90’s, but on May 5, 1996, a massive forest fire turned the once highly forested area into a relative empty expanse. The fire, which consumed about 7,500 acres of national forest, nearly wiped out everything at Lama Foundation. However, the Dome Complex and the kitchen, along with the, as yet incomplete, new kitchen and community center, survived. Twenty-two other buildings were entirely destroyed. The Intensive Studies Center (ISC) was burned to rubble though much of the foundation and the original adobe walls remained intact. Work immediately began to rebuild Lama Foundation, and enormous outpourings of love, effort, and funds poured in. Later that year, Ram Dass suffered a debilitating stroke and his physical presence at Lama Foundation was forever lessened.

Throughout the late 90’s and the first decade of the new millennium, Lama Foundation began building with a new vision, adding permaculture to the list of community efforts. Massive efforts were undertaken to protect the unstable soil from eroding and to provide clean drinking water. New buildings were constructed with fallen timbers, straw bales, cob walls, passive and active solar heat, and other natural building techniques. New gardens were developed, and the whole mountain buzzed with activity. During this time, Lama became a classroom for permaculture and natural building, hosting many workshops dubbed “Build Here Now”. Work continues to this day, and Lama Foundation has hosted a full program of retreats for many years now. Housing is available for a limited number of residents and guests, and work is under way for increased guest capacity.

Since the fire, the resident circle has shrunk to about 8-12 people each year, but in the summer there may be as many as 100 people on the land: teachers, retreatants, stewards, guests, and volunteers. The sense of community is palpable, the core values are firm, the practices are breathtaking, and with God’s grace, the future will bring many more people to Lama.

The Governance of Lama

Lama is guided by the spirit of consensus, and every decision must go through some form of it. Each body, however, has a unique method of consensus.

The resident circle is responsible for most daily decisions. From summer programs, maintenance of the infrastructure, accounting, record keeping, organizing practices and events, conducting meetings, coordination of the kitchen, oversight of construction, editing the website, laundry, and doing the dishes – every detail of daily life at Lama is in the purview of the resident circle. This work is completed only with the enormous aid of the steward community in the summer and the dozens of volunteers that work tirelessly throughout the year.

Consensus among the residents evolves as problems emerge and new ideas are tried, however we have found some nuggets that appear to hold true throughout all iterations. Decisions must be made with everyone who is impacted in mind. The intent is always to include the desires and concerns of every person, and some meetings can last a long time as we put our heads together to craft a decision that accommodates all the various perspectives. Needless to say, meetings are an integral aspect of resident life at Lama.

Within the resident circle, there is a group of caretaking members, generally residents who have been at Lama longer and have an eye towards the long-term success of the Foundation. From these members are elected a Coordinator, Treasurer, and Secretary, the three officers of the Lama Foundation, the closest thing Lama has to an executive branch. The board of trustees places the legal responsibility for the Foundation in their hands.

As a non-profit, Lama Foundation is required to have a board of trustees. Ultimate legal authority rests in the hands of this board, per the structure of 501c(3) organizations, but the board, mostly comprised of past residents, chooses to serve as an advisory board rather than a decision-making body. They do not impose decisions upon the resident circle, but prefer to make suggestions. Their wisdom and insight, of course, are obviously invaluable and therefore they exercise significant “soft” power.

The highest decision making body of Lama is the Lama Council. Comprised of three caretakers, two trustees, and two continuing members, the Lama Council is responsible for any decision that costs over $5,000 or has significant long-term impact on the Foundation.

But wait! The community of Lama is more, much more, than those entrusted with responsibility and authority. All of the stewards and volunteers, every retreatant and visitor, every person who walks up the Mountain or holds Lama in his or her heart is a member of the Lama community, and the intent of all of Lama’s members is to create an association that serves everyone. The governors and boards of Lama are servants, seeking a consensus of the whole.

Be Here Now, the story of Richard Alpert’s conversion and transformation into Ram Dass, amongst other things, is a perennial best seller and a 1970’s icon. A friend of Lama Foundation co-founders Steve and Barbara Durkee, Ram Dass returned from his first pilgrimage to India in 1970, taking up residence at Lama Foundation. During this time, he wrote what would eventually become the first section of Be Here Now, or Journey: The Transformation: Dr. Richard Alpert, PHD into Baba Ram Dass. He also, along with Steve and the other residents of Lama, contributed to the creation of the other three sections, the illustrations and aphorisms of From Bindhu to Ojas, the instructions given in the Cookbook section, and the recommended references in the Painted Cakes section. The work, originally hand-published by Lama Foundation quickly became a cultural phenomenon, and our portion of the sales continues to help support Lama Foundation to this day.